1. prokaryote- an organism that consist of a single celled organis, that does not have a nucleus.
2. binary fission- a form of asexual reproduction in single-celled organisms by whicj one cell divides into two cells of the same size.
3. endospore- a thick-walled protective spore that forms inside a bacterial cell and resists harsh conditions.

Section 1 was mostly about the characteristics of bacteria and archaea. It also dicussed about the way prokaryotes reproduce which is by binary fission. Binary fission is a form of asexual reproduction in single-celled organisms by which one cell divides into two cells of the same size. More information about prokaryotes was dicussed in the second paragraph. It talked about how prokaryotes have no nucleus and that all bacteria don't either. As you may well think about and figured out a prokaryote is a single-celled organism that has no nucleus. since theres no nucleus prokaryotes' DNA is not surrouned by a membrane. The DNA of prokaryotes is in circular loops. As you go on through the paragraph it discusses the steps of binary fission. In the fist step the cell's DNA is copied. The DNA and its copy then bind to different places on the inside of the cell membrane. As the cell and its membrane grow bigger, the loops of DNA separate. Finally, when the cell  is about double its orginal size, the membrane pinches inward. If you keep reading through the section it discusses about endospores which is a thick-walled protective spore that forms inside a bacterial cell and resists harsh conditions.In the next two paragraphs it discusses more information the domain Bacteria.The domain Bacteria has more individuals than all other domains combined do.It then discusses about classification of bacteria. Cyanobacteria are producers.These bacteria contain green pigment clorophyll. At the end of the section it dicsusses domain Archaea. The three main types of archaea are heat lovers, salt lovers, and methane makers. Heat lovers live in the ocean vents and hot springs. Salt lovers live in high levels of salt, such as the Dead Sea. Methane makers give off methane gas and live in swamps and animal intestines.

This is a image of the 4 steps of binary fission:
1. The cell grows
2. The DNA is copied and attached to the cell membrane
3. The DNA and its copy separate as the cell grows larger
4. The cell splits in two; each new cell has a copy of the dna

This section was all about bacteria's role in the world. In the beginning section it talked about nitrogen fixation, recycling, and cleaning up. Most living things depend on plants. Plants need nitrogen to grow. Nitrogen gas makes 78% of the air we live in, but most plants cannot use nitrogen directly from the air. Nitrogen-fixing bacteria take in nitrogen from the air and change it to a form that plants can use. In the next paragraph it talked about recycling and how a decomposer breaks down a dead plant and animal matter. If you keep reading through the the section you will find some important information in the fourth paragraph. In the fourth paragraph it talks about bioremedation and what it is. Bioremedation means using microorganisms to change harmful chemicals into hazardous waste from industries, farms, and cities. It is also used to clean up oil spills. Next in the section in the middle it talks about how bacteria can be good for peeople and help them, the bacteria in your food, the bacteria in your medicine, bacteria in insulin, and genetic engineering. Bacteria do much more than keep our environment clean. Bacteria also help produce many of the foods we eat. They also make important medicines such as antibiotics. Antibiotics are medicines used to kiull bad bacteria and microorganisms. Bacteria is in cheese, yogurt, buttermilk, and sour cream. When scientists change the genes of bacteria, or any other living thing, the process is called genetic engineering. Bacteria can also cause harm humans. Scientists learned in the 1800s that some bacteria are pathogenic. Pathogenic bacteria are bacteria that cause disease. Pathogenic bacteria get inside a host organism and take nutrients from the host's cells. In the last paragraph it discussed about diseases in other organisms. 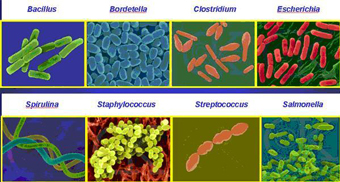 This is a image of shapes of bacteria

1. virus- a microscopic particle that gets inside a cell and often destroys the cell
2. host- an organism from which a parasite takes food or shelter

This section was all about viruses. A virus is a microscopic particle that gets inside a cell and often destroys the cell.   A host is an organism from which a parasite takes food or shelter. Like living things, viruses contain protein and genetic material. Viruses can't eat, grow, break down food, or use oxygen. In fact, a virus cannot function on its own. A virus can reproduce only inside a living cell that serves as a host. If you keep reading after that paragraph the next paragraph is classifying viruses. Viruses can be grouped by their shape, the type of disease they cause, their life cycle, or the kind of genetic material they contain. Every virus is made up of genetic material inside a protein coat. The protein coat protects the genetic material and helps a virus enter a host cell. Many viruses have a protein coast that matches characteristics of their specific host. The genetic material in viruses is either DNA or RNA. Most RNA is made up of one strand of nucleotides. Most DNA is made of two strands of nucleotides. A virus attacks living cells and turn them into virus factories. This cycle is called the lytic cycle. In the lysogenic cycle, each new new cell gets a copy of the virus's genes when the host cell divides.In the end it all about how to stop viruses
Since you have learned a little about bacteria and viruses here's a video.
Rap on bacteria and viruses