This section was all about protists. It discusses the general characteristics of protists, protists and food and how protists produce food, how they find food, and how they reproduce. Protist can differ from eachother in three ways, how many cells they have, the way they get food, and the way they move. But they do share some characteristics. All protists are eukaryotic and have a nucleus. Protists are less complex than other eukaryotic organisms. Protists get food in many ways. Some protists can make thier own food. Other protists eat other organisms, parts or products of other organisms, or the remains of other organisms. Protist producers have special structures called chloroplasts in in their cells. Protists use this energy to produce food in process called phosynthesis. Some protists must get food from their environment. These protists are heterotrophs (HET uhr oh TROHFS).Heterotrophs are organisms that cannot make their own food. These organisms eat other organisms, parts or products of other organisms, or the remains of other organisms.Many protist heterotrophs eat small living organisms, such as bacteria, yeast, or other protists. The way that these heterotrophs get food is similar to how many animals get food. Some protist heterotrophs are decomposers. Decomposers get energy by breaking down dead organic matter. Some protists get energy in more than one way. For example, slime molds get energy by engulfing both small organisms and particles of organic matter.Some protist heterotrophs are parasites. A protist invades another organism to get the nutrients that it needs. An organism that a parasite invades is called a host.Most protists reproduce asexually. In asexual reproduction, the offspring come from one parent. These offspring are identical to the parent. Figure 3 shows a member of the genus Euglena reproducing asexually by fission. In binary fission, a single-celled protist divides into two cells. In some cases, single-celled protists use multiple fission to make more than two offspring from one parent. Each new cell is a single-celled protits
Some protists can reproduce sexually. Sexual reproduction requires two parents. Members of the genus Paramecium (PAR uh MEE see uhm) sometimes reproduce sexually by a process called conjugation. During conjugation, two individuals join together and exchange genetic material by using a small, second nucleus. Then, they divide to produce four protists that have new combinations of genetic material. Figure 4 shows two paramecia in the process of conjugation. 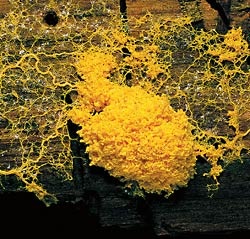 This a picture of slime molds.
Protist rap

Many protists are producers. Like plants, protist producers use the sun’s energy to make food through photosynthesis. These protist producers are known as algae. All algae (singular, alga) have the green pigment chlorophyll, which is used for making food. But most algae also have other pigments that give them a color. Almost all algae live in water.Some algae are made of many cells, as shown in Figure 1. Many-celled algae generally live in shallow water along the shore. You may know these algae as seaweeds. Some of these algae can grow to many meters in length.Most of the world’s seaweeds are red algae. Most red algae live in tropical oceans, attached to rocks or to other algae. Red algae are usually less than 1 m in length. Their cells contain chlorophyll, but a red pigment gives them their color. Their red pigment allows them to absorb the light that filters deep into the clear water of the Tropics. Red algae can grow as deep as 260 m below the surface of the water. The green algae are the most diverse group of protist producers. They are green because chlorophyll is the main pigment in their cells. Most live in water or moist soil. But others live in melting snow, on tree trunks, and inside other organisms.Many green algae are single-celled organisms. Others are made of many cells. These many-celled species may grow to be 8 m long. Individual cells of some species of green algae live in groups called colonies. Most of the seaweeds found in cool climates are brown algae. They attach to rocks or form large floating beds in ocean waters. Brown algae have chlorophyll and a yellow-brown pigment. Many are very large. Some grow 60 m–as long as about 20 cars–in just one season! Only the tops of these gigantic algae are exposed to sunlight. These parts of the algae make food through photosynthesis. This food is transported to parts of the algae that are too deep in the water to receive sunlight.Some heterotrophic protists have special traits that allow them to move. Other heterotrophic protists cannot move on their own. Those that can move are usually single-celled con sumers or parasites. These mobile protists are sometimes called protozoans
Amoebas and similar amoeba-like protists are soft, jellylike protozoans. They are found in both fresh and salt water, in soil, and as parasites in animals. Although amoebas look shapeless, they are highly structured cells. Amoebas have contractile vacuoles to get rid of excess water. Many amoebas eat bacteria and small protists. 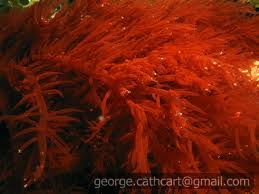 This is a picture of red algae

1. fungus- eukaryotic heterotrophs that have rigid cells walls and no chlorophyll
2. hypha- a nonreproductive filament of a fungus
3. mycelium- the mass of fungal filaments, or hyphae, that forms the body of a fungus
4. spore- small reproductive cells that are protected by a thick cell wall
5. mold- a fungus that looks like wool or cotton.
6. lichen- a combination of a fungus and algae that grow togethger

Section 3 is all aboutr fungi. It discusses the characteristics of fungi, food for fungi, reproduction of fungi,kinds of fungi, and lichens. fungi are so different that they are placed in there own kingdom. Fungi are heterotrophs, but they can't surrounded or catch food. Most fungi are consumers and get nutrients by secreting digestive juices onto a food source and then absorbing the dissovled food. Many fungi are also decomposers, which feed on dead plant or animal matter. There are other fungi that are parasites. Some fungi live with other organisms, for example, many types of fungi grow in or on in the roots of a plant. The plant provides nutrients the fungi and fungi helps the roots absorb minerals and protects it. Some fungi are single celled, but most have many cells. These cells are made up of chains of cells called hyphae. Openings in these cells allow cytoplasm to move freely between the cells. Most of the hyphae that make up a fungus grow together to form a twisted mass called mycelium. Reproduction in fungi may be either sexual or asexual. In one type of asexual reproduction, the hyphae break apart, and each new piece becomes a new fungus. Asexual reproduction can also take place by the production of spores. Sexual reproduction in happens when special structures form to make sex cells. The sex cells join to produce sexual spores that grow into a new fungus. There are four kinds of fungi; threadlike fungi, sac fungi, club fungi, and imperfect fungi. In threadlike fungi most of the fungi live in soil and are decomposers. But some are parasites too. Threadlike fungi can reproduce sexually and asexually. Sac fungi are the largest group of fungi. Sac fungi can reproduce asexually and sexually during their life cycles. Most sac fungi are made of many cells, but yeasts are single-celled. Some sac fungi are useful and some aren't. Club fungi reproduce sexually and are umbrella-shaped. Club fungi are edible, but not all are. There are nonmushroom club fungi. Bracket fungi, puffballs, smuts, and rusts are also club fungi. The imperfect fungi are all of the species that do not quite fit in other groups. In the last paragraph it discusses lichens. Unlike fungi, lichens are producers and produces food through photosynthesis. Lichens only need air, light, and minerals to live, so they live on rocks. Lichens absorb water and minerals from the air. 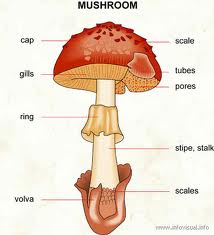 this is a diagram of club fungi.